So I had a bunch of stuff written but somehow blogger lost it. grrrr.  oh well I will write what I can remember.  So, Friday and Saturday were uneventful.  I basically relaxed around the Wat and headed into Damnoen a couple times to get some groceries and some food.  I am finally started to dig down into some books and learn to count in Thai which was interesting.  The funny thing is that during the week I handed the bus driver 15 baht and start to walk away and he start yelling "sip-sam, sip-sam" which is 13 in Thai so I turned around for my change.  I usually don't bother if I don't have the exact change, as the price seems to fluctuate from driver to driver.  Now if I would have learned the numbers, I don't think I would have even turned around.  LOL

On Sunday, I went to the minimart about a half hour before dusk to have some ice-cream.  On my way back it was pretty dark, I was just riding along and all the sudden a bird swooped down around my head.  I thought to myself, hmm must be close to its nest, until it happened a few more times andI looked back to see that it wasn't a bird, it was some bats.  Well I soon found out what the were doing, as it was like I was going trough a swarm of bugs all the way home.  I now know not to ride my bike at this time of night.  When I got home, I found that I had left my light on (who knows why) and there were tons of bugs flying around.  I had never seen this before and they were even in my room.  grrrrr.  So I tried to get the ones out of my room with a pale and a plastic divider, as we aren't suppose to kill anything here, but after a few tries it seemed pointless.  So I then decided I would just turn off all the lights, and go turn on the street light (yes, there is a switch on my house to control the street light) and stood on the road for about 10 minutes.  When I cam back, they were all gone.  Not sure what kind of bugs they were, as the seemed to loose their wings quite easily.  They were maybe 1.5 cm long but their wings were more like 2-2.5 cm long.  When I went into my place the were on the floor with no wings, so I sweated them up and put the gently outside.  I have yet to see them again, but I haven't forgot to turn my light off either.  I thought I was going to have to go sleep in the boys dorm that night, but luckily of got rid of them and I had my trusty bug net over my bed.

Well on Monday, I woke up to a thunderstorm, some rain, and the start of a Sinus cold.  It rained all day Monday, so I had to get my raincoat out.  I found out that white pants aren't the best to be wearing when its raining as when they become wet they sorta become see through LOL. I only had to go out in the rain a couple of times and it was actually quite refreshing to not be so hot out.  I taught the Monks in the morning, but the kids class was cancelled due to the parents were too busy to get them there so I had the night off.  On Tuesday, I woke up my sinus cold being worse and nasty headache so I cancelled classes for the day as I barely wanted to leave the bed.  I basically slept all day and all night, well except for going to lunch.  The next day, I wasn't much better, but went to teach the monks.  Only had 1 monk that day so we just did some conversation practice for the class.  At the end of class, I went for lunch, and then straight to bed.  I woke up about 3 hours later feeling even worse so I canceled the Kids class again (poor kids) and so we also decided to cancel Thursdays class also so that I will be ready for next week.  How I hate having a cold when its nice out, it would be bad if it was -50 out, but +30. :) I basically slept the rest of the day Wednesday.  So on Thursday, I went into town to pick up some groceries and I was sitting there talking to my mom on the phone and guess what's walking down the street, a baby elephant.  It was really cute and people were feeding it.  It even tried reaching into a guy's pocket for some snacks.  Too funny.  Well after I got some groceries, I headed back home and basically slept the rest of the day away. 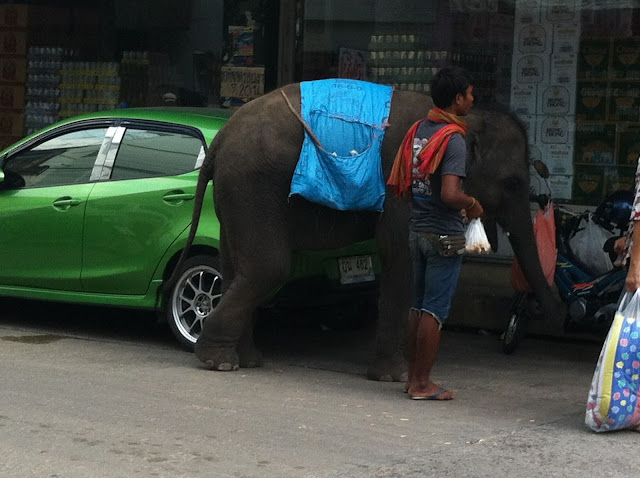 So, today I woke up and am actually feeling a bit better.  Actually feel like moving around.  Had some breakfast (oh, I finally bought some milk and cereal), talked to my mom and brother, then headed for lunch.   The lunch was quite interesting today.  I basically ate the broccoli, some veggies out of the soup, some of the beef stuff, and rice, which was delicious I may add but I wasn't going to eat the little fish that were looking at me, well not at less someone else was going to and I was the only one at the table. 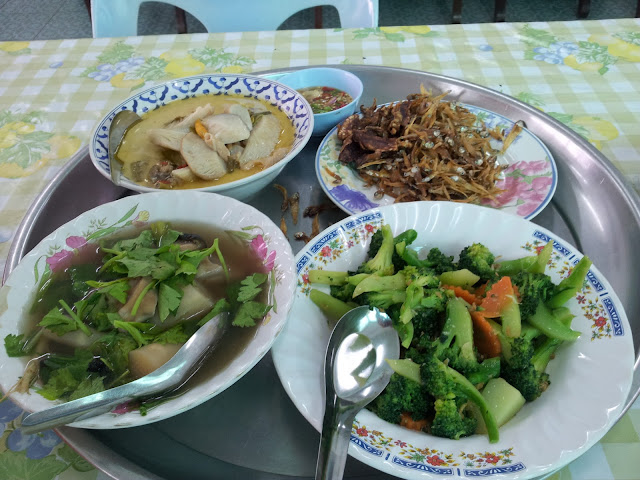 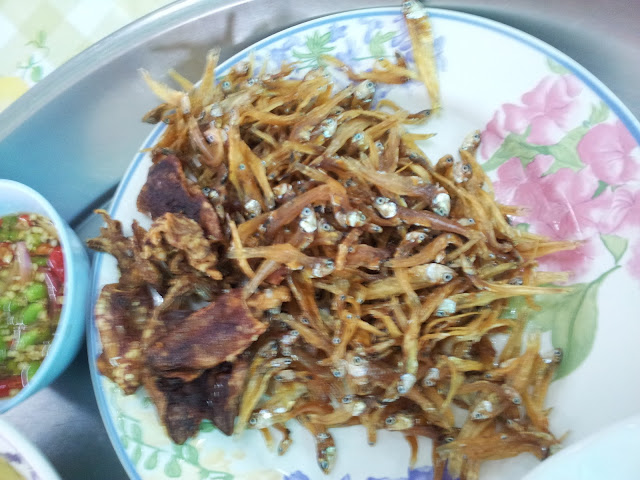 Now, I guess I am finally up to date on this blog thing again.  I am sitting in the nice Air conditioned library writing this.  Not sure what in store for the weekend, probably head into Damnoen and maybe go back to the floating market tomorrow morning to explore it on my own. I guess the deciding factor is whether I'm finally over this cold or not.  Have a good weekend and I'll post some more updates next week.
Posted by Brent at 3:42 PM