On Monday, I headed to Cambodia and it was quite the experience.  It started off with a 2 hour bus ride to Bangkok's Southern Bus Terminal, a taxi for about 1.5 hours to the other side of Bangkok, a Van for 4 hours to Pot Poi, Cambodia, and then an 9 hour to Phnom Penh.

The bus and taxi rides were just like all the others, but the trip in the Van was actually quite intense.  Well for starters there is no speed limit really in Thailand.  a lot of people drive around 140 to 150.  Which was actually quite fun for the first little bit as we had double lane highways with a cement separator in the middle so the driver was weaving in and out of traffic, driving down the should of the road, and going in the right turning lane (remember they driver on left here, so the right turning lane is only there for a while) to get ahead of all the traffic.  I actually really wanted to driver. LOL When it turned into single lane highway though it was really quite interesting.  The cars actually drive on the shoulder for the most part (or move over if they are not) when you pass them and there seems to be an imaginary centre lane that either way can use to pass.  The driver basically tried to stay going 120 - 140 all the way there.  I only saw a couple accidents on the way which was surprising considering the traffic and the way they driver. :)

At Pot Poi, the driver just dropped me off at the 7-11 and left.  I didn't really do any planning on how I was going to get the rest of the way.  Unfortunately, ever one around couldn't speak English.  I started walking towards what I thought was the border because a bunch of people were walking from that direction and decided to just ask one of the people walking where the border was.  They pointed in the completely opposite direction compared to what I was walking, so I doubled back.  The border was actually easy to find once you know the right direction, imagine that.  LOL  At the border, a couple guys who you can pay to go get your new visa started trying to get me to let them get mine.  But do I really want to send my passport with a young guy that I don't even know.  I think not.  They tried telling me there was no bus to Phnom Penh and that I shouldn't go but I decided to anyway (how do you know without trying besides there was hotel casinos right on the other side of the border.  When crossing the border, a guy came up to me and started talking to me, asking me where I was going, if I had a visa yet, etc.  He ended up leading me throughout the whole process, helping me with the form, taking to from place to place as the places to get your visa and get into Cambodia were about to close.  Ended up following him right through the whole process of getting a visa and getting over the border, then on top of that he took me to the places (paying for the motorcycle rides from place to place) to get some Cambodian currency, get a bus ticket, and get to the bus station.  I ended up giving him 1000 baht as I don't think I would have got all the way through in time without him.  He even actually came all the way on the bus, talking to the driver to get me checked in, and showed me where my seat was.

The bus ride from Pot Poi to Phnom Penh was not all the good though.  My seat really sucked (but that what I get for not booking a seat since the bus was right full), do you know how there 2 seat on both sides on each side of the bus all the way back, well my seat was the middle one at the very back of the bus so I was stuck with 2 people on each side.   So it was a bit comfortable and sometimes the road felt like we were driving down a back road but I managed to get some sleep and the trip actually went pretty quick.  The bus stopped every so often at towns, so people would get off to stretch, go to the washroom, or get something to eat.  I only got off once as I felt quite stiff from sitting for 6 hours and thought I should go to the washroom before we got there, and it was actually quite funny.  When I got off, I was looking around to see where the washroom was, and it was a bit strange as everyone was in a field going (even the ladies). LOL. But I guess if you got to go, you got to go.

When I got to Phnom Penh, I got off the bus and was immediately swarmed by a bunch of motorcycle driver trying to get me to pick them.  Well I didn't book a hotel either, thinking I would just wing this trip so the one driver showed me a couple hotels on some sheets of paper so I went with him.  The guy at the border had told me not to pay over 2000 Riels for the ride so I really had to bargain to get it down to there.  They wanted $2 (which is 8000 Riels) to start with.  I stayed firm though at 2000 and the ended up accepting. They kept saying it was quite far away.  When leaving the bus station, the guy ended up saying something to his friends about the 2000 Riels (which I don't think he was happy with), the whole thing seemed a bit shady.  Well we got to the too the hotel, which he took me to a different one than what I had chosen at the bus station, which may I add was only like 2 minutes away maybe 4 blocks, the hotel had no free rooms.  When I back out and was asking him to take me to a different hotel, he seemed like he didn't want to so I just told him to take me back to the bus station.  Back at the bus station, a guy came over that could speak better English and I told him what was going on  ( told him that this whole deal seemed a but shady). He sort of yelled at the driver, he seemed to be the one in charge at the start by he sending people with different drivers, and then I showed the hotel to the driver that I had initially thought I said we should go to, and he took me to that one.  When we got to that hotel, which was like 3 stores over from the the initial hotel, he had to wake up the owner who seemed to be sleeping on the floor in the front of the hotel. Well they had a room available ($20 US) and it was about 5:30 and I had just finished traveling for about 14+ hours so I took it.  But the room wasn't that nice and a bit dirty, I would give the room a 2 out of 5 at best. 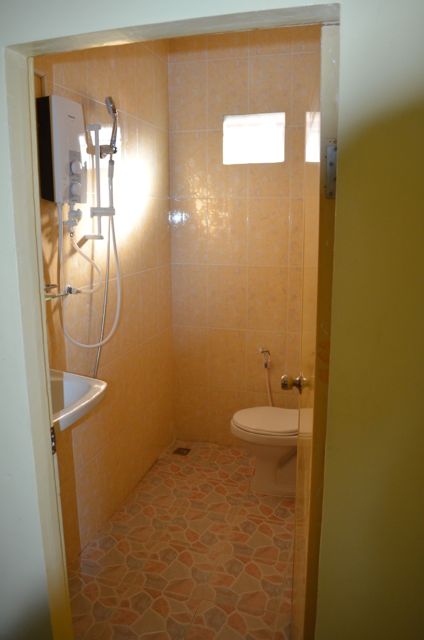 I  ended up sleeping for  about 3 hours, but them woke up and didn't feel like sleeping anymore so I got up.  I remembered to Thailand Embassy was only open to noon in Canada, so I though I should go get in there as I knew there was a waiting period to get it.  A guy gave me a ride to the embassy, dropped me off and just left right away.   I got there about 8:10 and when I walked up to the doors it wasn't open till 8:30.  There were some Thai officials standing outside and this other guy that started talking to me.  Well I found out that I needed some photos for my visa.  So the guy (who was a motorcycle driver), took me to get some photos.  When I got back to the Embassy, I filled out the paper work and got it handed in.  I have to go back tomorrow, as they weren't sure if they could approve it for the full 90 days as it needs some sort of approval.

So from there, this motorcycle driver ended becoming my chauffeur.  He asked where I was staying, and told me there is better places to stay for cheaper so I checked out of my hotel room and headed with him to check out some other hotels.  Well this one I'm staying in tonight is definately better than the previous one, room is smaller but much cleaner, it has a Jacuzzi tub, and was cheaper. 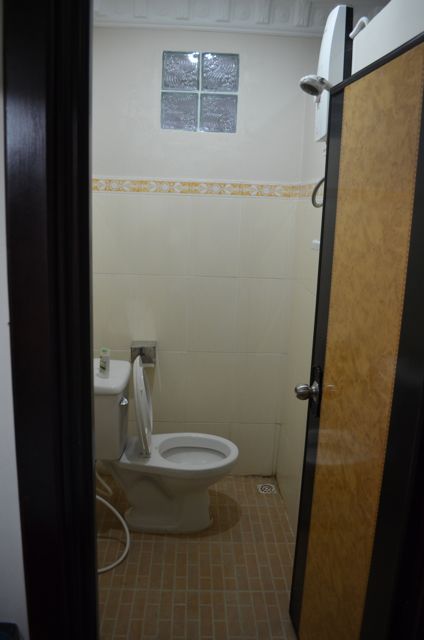 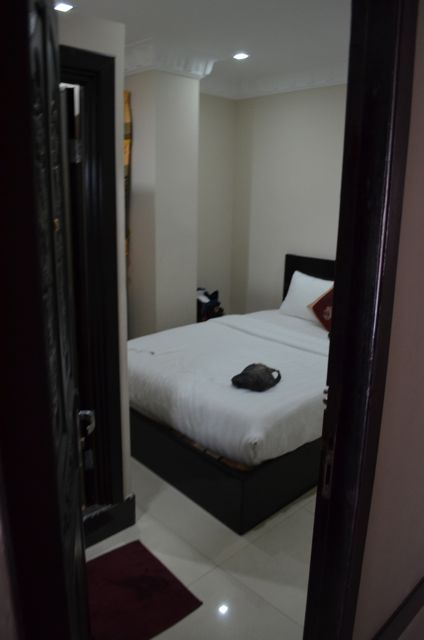 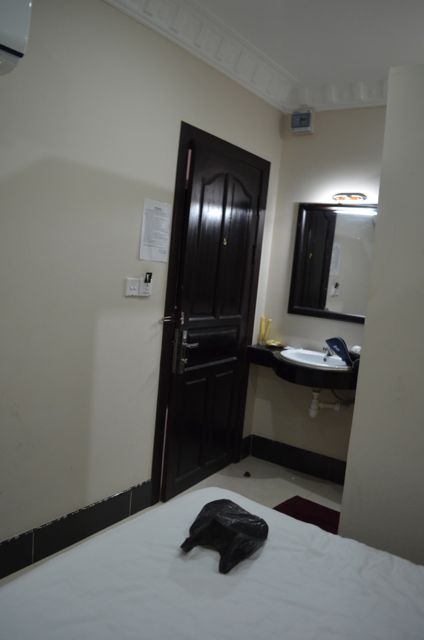 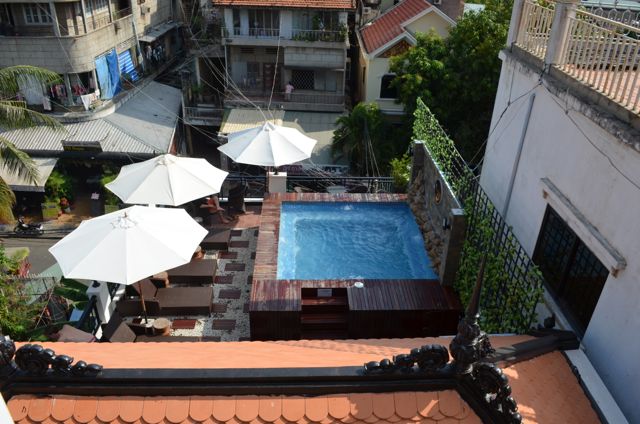 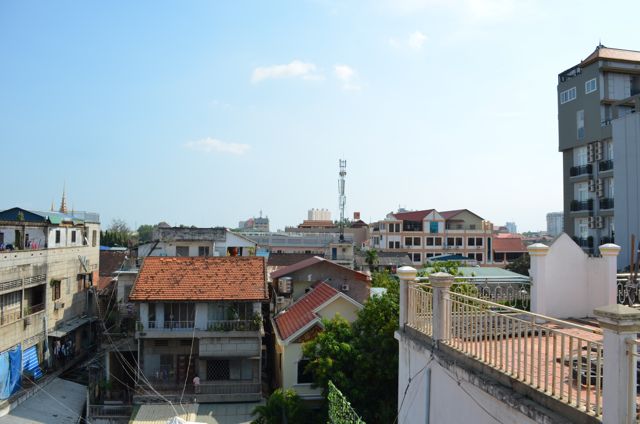 From there he took me to a restaurant, which had some bacon, eggs and toast which was delicious.  It actually tasted like our bacon which was nice.  He left me there and came back a while later to pick me up.  From there I went to Phnom Wat and Tuoi Sieng Genocide Museum (I'll post pics and info about these in a different post) then headed back to my room for a quick nap, some lunch at the hotel (which was some rice and chicken which was really delicious and cheap ($3.00 US), and a shower.  From there I headed on my own to The Palace (which I'll also post in another post) and wondered around the park for a bit. 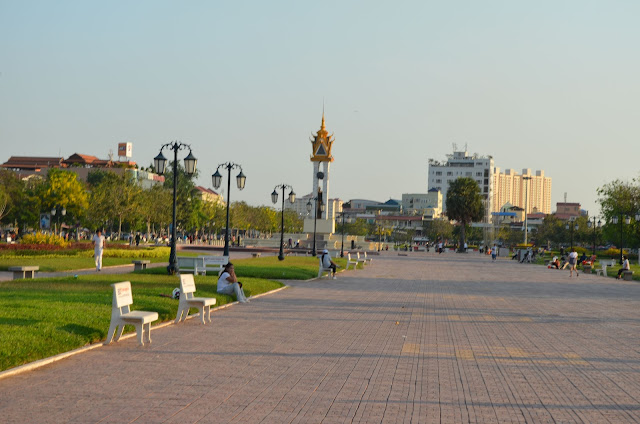 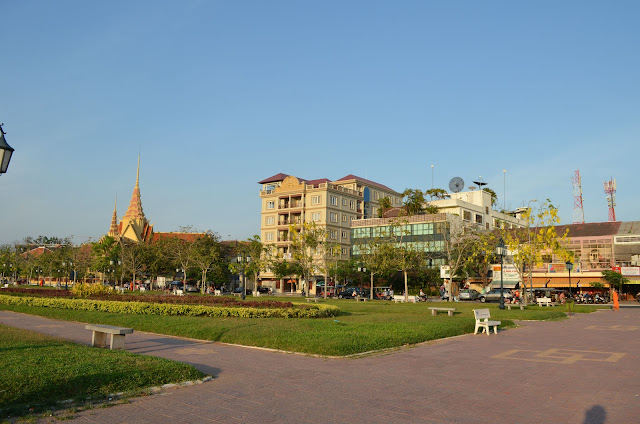 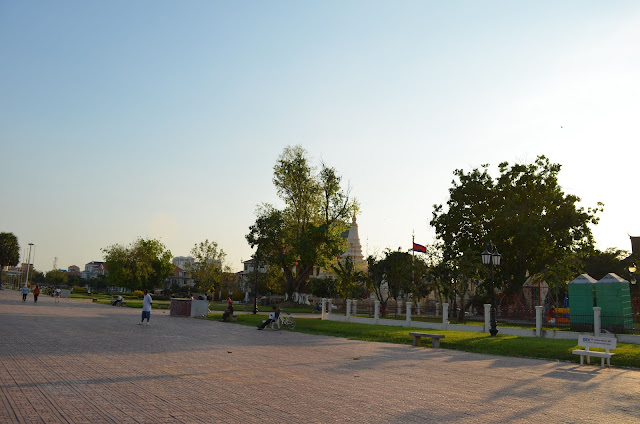 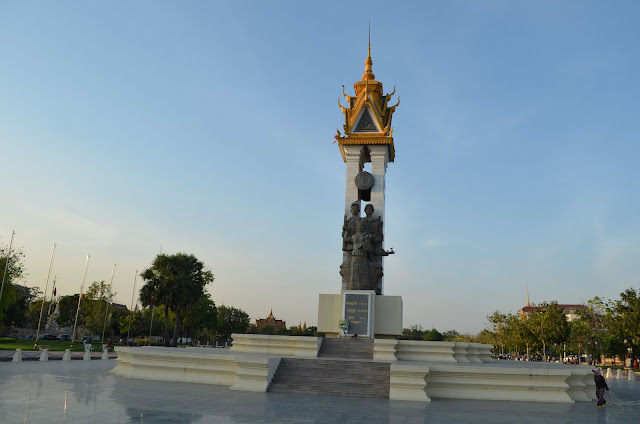 After that I came back to the hotel for a nice steak that I saw on the menu (it said imported beef so I had to try it) and a nice Cream Caramel for desert.  Both were really delicious, and I almost ordered a second steak.  After the steak, some locals had told me to go check out the river at night so I headed down there.  It was a nice view and there was lots of people there.  While sitting there 2 kids came up to me (like 6 and 9) and started saying stuff in Cambodian.  Wasn't really sure what they were saying so I just tried to ignore them.  After about 15 minutes, a local started to talk to me in English so I asked her what they were saying and she said they wanted money.  I sat there for a while, and some words in Thai and Cambodian are the same, like some numbers, so I recognized some of the words they were saying.  I recognized them saying they wanted 1000 Riels.  I finally broke down and gave each one of them a 1000 as it is only 25 cents.  Well about 5 minutes later, the one brought back a friend.  LOL.  So I gave that one a 2000 Riels as that's the smallest bill I had left.  That one left and the original 9 year old stayed as I had give the other more money.  Well I got her to start talking some English and teaching her a few more English words for about 10 minutes.    In the end,  I had a $1 US so I gave her that. 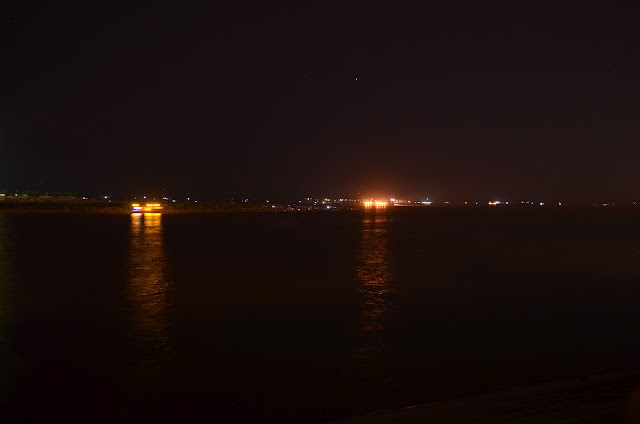 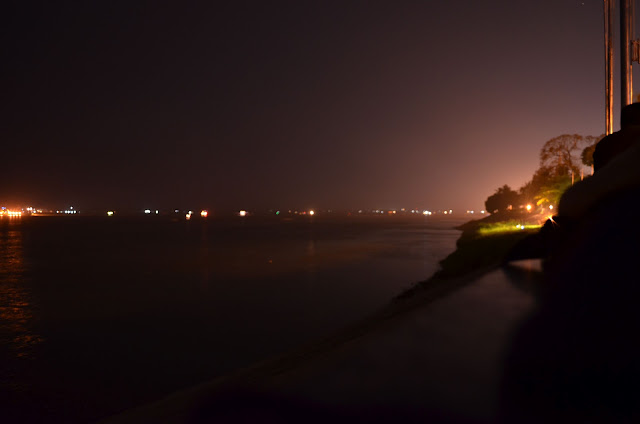 Well now I am up to now.  This morning I go to the passport office as I was told to come back at 10 to if the full 90 days will be approved, and then if everything is good with that, I am going to head to Angkor Wat.  Angkor Wat is a ancient Wat, 4 hours away, that's really famous here and is about 400 square km.  I was told it is a must see here so that thought I would go, as I need to wait till Friday to pick up my passport.  I'll try to get those other posts up as soon as I can but can't guarantee when.
Posted by Brent at 9:08 AM